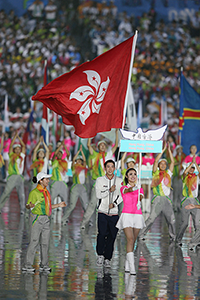 In response to global concern about childhood obesity and declining participation of youth in sports activities, the idea of the Youth Olympic Games was firstly introduced by Mr. Johann Rosenzopf in 1998.

However, International Olympic Committee (IOC) responded negatively about holding a pure sporting event for youth. IOC delegates wanted the event to be as much about cultural education and exchange as it was about sports, which is why the Culture and Education Program (CEP) was developed as a component of each celebration of the Games. At the 119th IOC session in Guatemala City on 6 July 2007, Jacques Rogge, the then IOC President, formally announced plans for the Youth Olympic Games.Bringing together the world’s best young athletes, offering an introduction into Olympism, innovating in educating and debating Olympic values are four of the goals for the YOG.

Singapore and Nanjing, China were selected as the host of the first (2010) and second (2014) Summer Youth Olympic Games respectively.


About the 3rd Youth Olympic Games

The Youth Olympic Games, promoted by the International Olympic Committee, is the world’s largest multi-sport event for high-performance young athletesaged between 15 and 18. It aims at inspiring athletes to embrace the Olympic values of RESPECT, FRIENDSHIP, and EXCELLENCE. The Games held every four years; it has two editions, winter and summer, which are held every two years alternately.

Buenos Aires 2018 will feature 32 sports from 6 to 18 October and four of them, Breaking, Sport Climbing, Karate, and Roller Speed Skating, will be making their debut on the Olympic stage.

Off the sports field, athletes also participate with spectators in various educational and cultural activities that promote Olympism.

The emblem itself aims to reflect the host city’s vibrant colours, eclectic culture and iconic architecture, with each character inspired by famous landmarks of Buenos Aires.

From the famous domed ceiling of the Colón Theatre and the flowing lines of the FloralisGenérica sculpture to the arches of the historic Abasto shopping mall and the towering angles of the Obelisco, the emblem showcases the style and diversity of the city and offers a glimpse of the many facets of Buenos Aires.It will also represent the hopes and dreams of every young athlete who is competing. 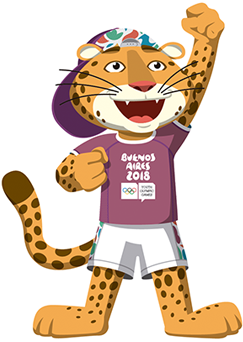 The jaguar named #Pandi, with a “hashtag” at the beginning to demonstrate its strong online profile, will be the mascot of the 3rd Summer Youth Olympic Games to spread the Games’ message and the Olympic values of friendship, respect, and excellence among different audiences, especially young fans and athletes.

#Pandi symbolises the desire for Buenos Aires 2018, the first edition of an Olympic celebration with strict gender equality, to serve as an important source of inspiration to build a better world through sport. The Buenos Aires 2018 mascot aims to inspire young people with the transformative power of Olympism and sport.

The jaguar, found in Argentina’s northern region, is an endangered species, and Buenos Aires 2018 hopes to raise awareness about the species’ risk of extinction through this mascot choice.